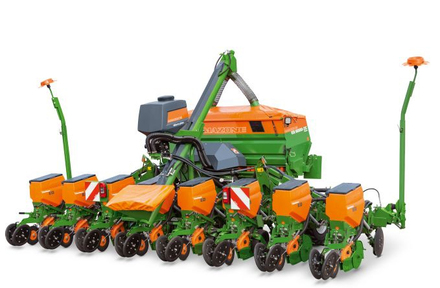 The ED precision air seeder scores with its precise seed placement and the very accurate singling system. When equipped with the appropriate singling disc it can be matched to almost any seed type. In addition the 60 l seed hoppers reduce the fill times. Mechanical fertiliser and singling drive on the ED Special. The ED Super, however, is equipped with electric drive for the fertiliser metering as well as hydraulic singling drive.

Apart from the rigid 3 m and 4.5 m machines, AMAZONE also offers the folding 4.5 m and 6 m versions. In addition, a front tank can be utilised as a fertiliser hopper.

The ED is ISOBUS compatible and can comfortably be operated with the Profi electronics via AMATRON 3, CCI 100 or other ISOBUS terminals. In its basic electronic equipment level, the ED Special is controlled via the machine specific AMASCAN+.

The AMAZONE Contour sowing unit is ideally suited to both mulch sowing and when working after the plough. The outstanding feature of the AMAZONE Contour sowing unit is the low singling disc position with a drop height of only 140 mm. The sophisticated coulter technology creates a seed furrow, virtually free from any organic matter. The sowing coulter undercuts the clearing disc, resulting in a well re-consolidated wedge shaped groove.
These are the optimum pre-conditions but, under very light and sandy soils, the additional carrying wheel can be fitted on to the Contour sowing coulter to prevent it sinking too deeply into the soil. In this way the placement depth can be maintained significantly better.

The Contour sowing unit is guided via a longitudinal tandem, supported at the front by a one-sided press roller and at the rear by a V-press roller or Farmflex tyres. In this way the influence of the ground contours on the smooth ride of the unit is significantly reduced. Clods do not make the unit jump but it smoothly runs over them. So, any change in placement depth due to an uneven soil surface is minimised.
The front press roller has been deliberately mounted just on the one side so that the soil, thrown up by the fertiliser coulter, does not create additional movement on the unit. Thanks to the suspension in the longitudinal tandem, the unit can, on the one hand, optimally match the field contours and on the other hand it maintains a very smooth run at high forward speeds and on rough ground. Both factors result in an optimum accuracy of work with a precise placement depth! The weight distribution on the two press rollers in the longitudinal tandem can be adjusted. Depending on the soil conditions, always the right operating settings can be found. 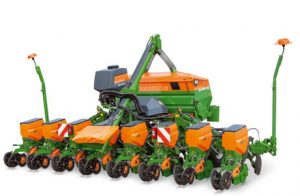 The EDX trailed precision seeder, which can be used after the plough, in mulch or for direct sowing, is characterised particularly by its reliability and its high operational comfort. The EDX, in working widths of 6 m and 9 m, has seed hopper sizes of 600 l and 800 l respectively and can  be operated at speeds of up to 15 km/h.

All models have in common that they can be operated, both following conventional or conservation soil tillage or for direct seeding. This applies equally as well when sowing maize, sunflowers and rape.
The trailed EDX 6000-TC and 9000-TC are ideally suited to large sized fields.
Experience in practice shows that with an EDX 9000-TC, depending on the farm, a seasonal output of up to 1,500 ha is possible whereas with, for the smaller EDX 6000-TC, the value amount to approx. 900 ha respectively.

Instead of the usual vacuum singling, on the EDX, the Xpress singling and placement system is used. Grain
singling and grain placement are separated: By a pressurised system, the seed is kept on the move by the singling set-up and delivered via the seed tube for the precise placement in the seed furrow enabling operational speeds of up to 15 km/h to be achieved.

AMAZONE offers two singling drums for each of the three cultures; maize, sunflowers and rape, so that, even with the differing properties (shape, size, etc.), the seeds can always be cleanly singled.

The precise pneumatic singling of the seeds is performed, depending on machine model and row spacing, from 6 up to 16 rows simultaneously via the centralised singling drums (1). The stripper finger (2) adjustment for singling a grain to each of the holes in these drums is carried out centrally.

After the singling process, the seeds are then “shot” via the seed barrels (3) into a separate placement zone, the so-called Xpress catcher system with furrow former (5) and catcher roller (6). Behind the two leading cutting discs (4) the furrow former (5) makes a furrow profile in a rectangular shape. The following catcher roller (6) covers right up to the edges of the furrow so that the seeds cannot roll out of position but are safely caught and pressed into the furrow even in unfavourable soil conditions. This ensures the optimum placement quality. As the catcher roller (6) is arranged neatly behind the furrow former (5) the placement quality remains constant even at increased forward speeds. Another advantage compared to a conventional precision air seeder is that the placement accuracy from the Xpress catcher system is now independent of the state of wear of the sowing coulters. 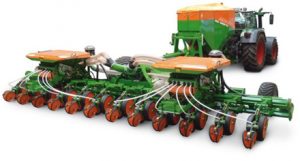