You are here > New Machines > Cultivators 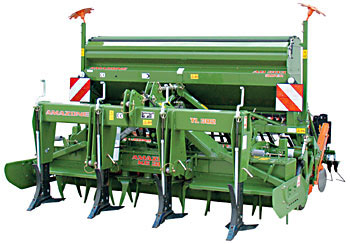 View a video of this product

The KE rotary harrow is superbly suited for soil tillage after the plough and mulch sowing on pre-cultivated soils. The strong frame, one piece rotor head and shaft and a sprung tine fixing result in a very robust implement. The large clearance between the tines and above the rotor heads ensures the free passage of large amount of straw or clods of soil. 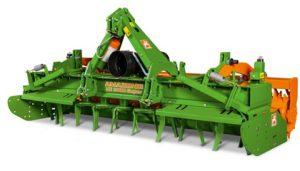 Many farmers want to use a flexible machine for differing soil and operating conditions. That means, for example, a rotary cultivator with their ”on-grip” tines for relatively heavy soils when mulch sowing and a rotary harrow with tines set to trailing mode on lighter, stony soils, so that the stones are pressed back down into the soil. Previously, the tines have often simply been turned from ”trailing” to ”on-grip”. The finished result can then often be unsatisfactory, because only tines specially designed for each specific purpose can produce the best work. 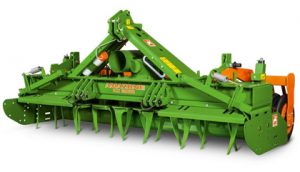 The KG rotary cultivator incorporates all the design features of the rotary harrow but has an even thicker skinned trough, bigger diameter shafts and stronger tines. AMAZONE rotary cultivators are equipped with the proven ”On Grip” tines to pull themselves into work and automatically maintain the desired working depth. Also in dry and firm fields the rotary cultivator breaks up the soil without any problems and simultaneously intensively incorporates the straw. The large clearance between the tines and above the rotor heads ensures the free passage of trash and soil mixture.

The compact designed, close coupled TL deep loosener offers the possibility of the optimum cultivation technique without prior ploughing even in heavy trash condition. Wide wing shears and a large clearance between the legs allow a blockage free operation. The deep loosener is available with 3 m working width and operates with a working depth of 15 up to 25 cm in combination with rotary cultivator, packer roller and Pack Top seed drill with RoTeC roll disc coulters. 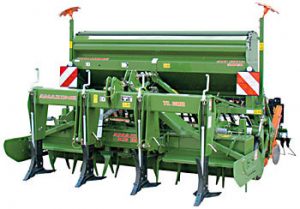 View a video of this product
Close Video